HomeStudioToday is on the hunt for the best piano virtual instrument plugin.  I reviewed Toontrack’s EZKeys Grand Piano already, and now in the second installment in this series, I’ll be taking a look at AIR Mini Grand.  Look for more reviews in the coming days and weeks, followed by a round-up review with my final opinion. Without further ado, let’s take an in-depth look.

Anyone who has used Pro Tools in the last decade or so is most likely familiar with AIR Mini Grand, as it has come bundled as part of the AIR Instrument Expansion Pack included with most versions of Pro Tools for quite some time.  For the uninitiated, AIR Mini Grand opens to a beautiful top-down view of a black baby grand piano with golden hardware inside. The control knobs reside at the top of the plugin, also embossed in gold, and include piano model, dynamics, reverb, tuning, and output level.  All of the controls are easily accessible and fairly self-explanatory. AIR included MIDI CC control directly in the plugin through a right-clickable menu, which I found to be both intuitive and functional.

Mini Grand has seven piano models, including Real, Ballad, Bright, Soft, Hard, Atmo and Dance.  Real is your basic, unmodified grand piano tone with the normal mid-range presence you would expect to hear sitting at a real piano.  Ballad has a more pronounced low-end, lending well to piano-only ballads as the name suggests. Conversely, Bright has a crisp high-end with reduced mids and lows.  Soft recreates the sound of playing softly by reducing highs and mids, while Hard does the opposite, boosting upper frequencies. Atmo sounds a lot like what you would hear in an adjoining room with thin walls if someone was playing the piano next door.  Rounding out the models, Dance has a very present, almost biting tone that would certainly cut through a mix among heavier instrumentation.

The built-in reverb controls in AIR Mini Grand are quite robust.  Reverb models include Soft, Bright, Studio, Chamber, Hall and Ambient, and the mix control blends the wet and dry signals.  Soft is a very subtle small-room reverb, while Studio and Bright are large-room reverbs with standard and brighter responses, respectively.  Chamber adds the metallic sound of a reverb chamber and is best when used delicately, as it becomes overpowering at higher mix levels. Hall is a convincing hall reverb that faithfully recreates the sound of a concert hall when mixed higher.  Ambient greatly increases the overall reverb time, and when used in conjunction with the Atmo piano model reminds me of standing in the hallway during a piano recital waiting to go on.

The Dynamic Response knob acts as a sort of compressor by boosting the velocity of incoming MIDI notes.  At the lowest level of Dynamic Response, every MIDI message is played at full velocity, removing all nuance and subtlety from the performance, and also tending to clip the meter if the output is set for a higher Dynamic Response.  Also, I didn’t notice any perceptible difference between 50% and 100%, so I generally set this to about 50% and left it alone, as I didn’t find it to be all that useful of a feature. I would have greatly preferred an in-plugin compressor function.

AIR Mini Grand‘s tuning Scale can be set to Stretched or Equal, and emulates the tuning methodologies for real pianos – either relative tuning or mathematical tuning from A440.  Stretched sounds the best when used as a solo instrument, while Equal is good when used with other virtual instruments to avoid undesirable dissonances. Though it is nice to have two tuning models to choose from, after playing with Toontrack’s EZKeys Grand Piano at great length I did miss having some of the fine-tuning and detuning capabilities of that plugin. This led me to do a bit of quick research, and I found that all of the other plugins in this series do offer more advanced tuning functions. As a result of this and the clipping caused by the Dynamic Response knob, I did choose to score this plugin down to three out of five for Features.

AIR included thirty presets with Mini Grand, along with a save function for users to add their own.  The presets allow one-click access to favorite settings for all of the functions listed above plus output volume.  With names like ‘Concert Hall Back Row’ and ‘Compressed + Cutting,’ it’s clear that AIR put some thought into each of the settings to make them as versatile as possible.  My personal favorite preset is called ‘Love Scene,’ and consists of the ‘Real’ piano model, Ambient reverb mixed at 30%, Dynamics set to 50%, and Stretched tuning. This setting was what I used for the sample below – the only tweak I made was to increase the output volume slightly.

Mini Grand comes with a bunch of presets that you can use as starting points, but the real value with this plugin is in the versatility.  Using the different piano models in concert with the reverb features, you can dial in a vast number of usable tones for myriad purposes, from bright dance music to realistic piano ballads and everything in between.  There’s no complicated menus to navigate, no confusing features, and by starting with the presets and tweaking settings from there, you can quickly find a realistic piano sound to add to your mixes.

Here is a sample of AIR Mini Grand using the Love Scene preset with no changes other than a slight boost in level:

I have tried a few free piano VST plugins over the years, but haven’t really been happy with any of them, which was one of the major motivating factors in writing this review series – to find the best piano plugin for me to buy myself and add to my arsenal. Even at its normal price, AIR Mini Grand is a great value and a useful tool for anyone who wants a realistic piano sound in their mixes.

Having switched away from Pro Tools a few years back, I haven’t been able to use the AIR plugins that came with it in my new mixes. I remembered AIR Mini Grand to be a faithful reproduction of a grand piano sound, and when I loaded it up to write this review I did get a tad nostalgic. Frankly, I missed having it around. In summary, I give AIR Mini Grand 4.5 out of 5 stars and my recommendation as the best value available among our round-up. 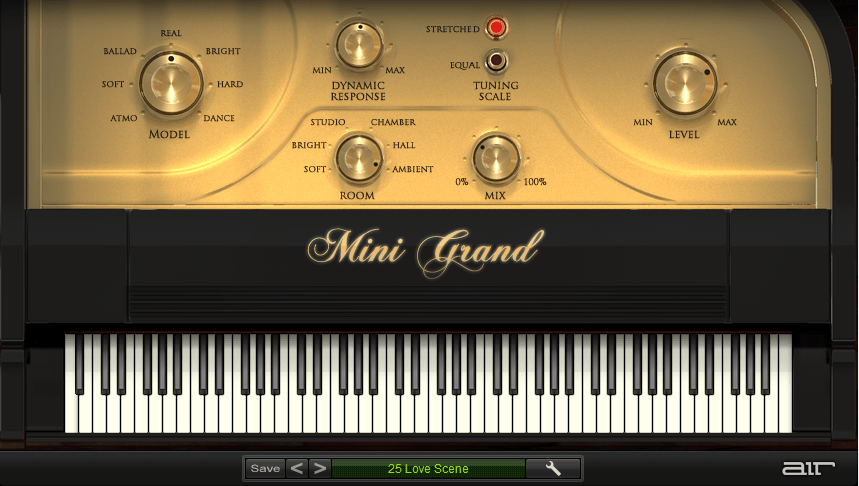 An incredible value on a faithful reproduction of the classic grand piano sound.