Description: A transparent and musical compressor with multiple detection modes, sidechaining, invertible filter for multiband operation, and a listen control for dialing in the perfect frequency curve.

Black Rooster Audio’s KH-COMP1 is easily one of the most robust compressor plugins I’ve had the pleasure of reviewing. It has all of the controls you would expect to find in a standard compressor, plus some nifty additional features that make this compressor incredibly surgical in nature and useful for any application.

Black Rooster Audio is known in the industry as an indie plugin developer that normally creates painstakingly accurate emulations of vintage analog gear. Taking this expertise in a whole new direction, Black Rooster has partnered with renowned multi-platinum mixing engineer Koen Heldens (XXXTentacion, Dr. Dre, Missy Elliot) to create a plugin for a piece of gear that doesn’t exist, the KH-COMP1 compressor. Today we’re going to take an in-depth look at this new “beast of a compressor” as Black Rooster is calling it, run it through its paces, and decide whether Black Rooster’s new partnership has birthed a plugin that is a good fit for your home studio.

Designed in most ways to look like a real rackmount compressor, KH-COMP1 is the first plugin I can recall using that has a camouflage motif. The bluish-grey paint job is complemented by nickel-colored knobs, yellow backlit VU meter and yellow jewel lights. It has an attractive interface, and all of the audio controls in KH-COMP1 are accessible from the main panel.

Starting from the left, the controls include Power toggle, Dual Mono / Stereo Link blend knob, high- and low-pass filter with independent Q controls, Listen toggle, four detection modes with sidechain toggle, Attack/Release and Threshold controls, Ratio, Knee, Make Up (gain) and Dry/Wet blend knob, plus a VU meter with GR, In, and Out modes. In the bottom right is a small menu icon with GUI options like knob behavior controls and interface size.

Black Rooster Audio’s KH-COMP1 is easily one of the most robust compressor plugins I’ve had the pleasure of reviewing. It has all of the controls you would expect to find in a standard compressor, plus some nifty additional features that make this compressor incredibly surgical in nature and useful for any application where you would normally employ a compressor. Let’s check out all the controls individually. (If you’re not familiar with all of the common controls of a compressor or how sidechaining works, you can check out my articles on How To Use a Compressor Plugin and How To Use Sidechain Compression for more details.)

One of the more unique features of KH-COMP1 is the Dual Mono / Stereo Linked blend knob, which allows either completely independent mono operation on both channels of a stereo track, fully linked operation, or any blended combination of the two. The Filter controls allow KH-COMP1 to be used as a standard compressor or as a laser-focused compression tool for individual frequency ranges. By setting the Low Edge, High Edge, and individual Q controls, you can dial in any frequency in the middle, or you can hit F.Inv (frequency inversion) to leave out the mids and compress just the frequencies above and below.

KH-COMP1 has four different Detection modes, plus sidechain operation. The detection modes are the standard RMS and Peak options, plus Vintage and Hilbert. Hilbert detection shifts the signal’s phase 90 degrees for more accurate compression without distortion, and Vintage adds pleasing harmonics. As an added bonus, KH-COMP1 can be sidechained to help carve out space in your mix for vocals and melody instruments.

The Attack, Release, and Threshold controls are standard issue on any compressor, but the Listen is not. The Listen control was easily my favorite feature, allowing me to dial in the exact frequency ranges that I wanted to compress. In the acoustic guitar sample below, I used the Listen control to find the presence peak in the budget mic used at the neck position and take some of the harshness out while still adding a pleasing compression and warmth to the mids and highs.

Ratio, Make Up, Knee, and Dry/Wet

KH-COMP1 has a ratio control that ranges from 2:1 up to 20:1, plus a variable knee control for dialing in the perfect attack. The Make Up controls your output gain, from 0dBFS to +36. The Dry/Wet control is a blend knob for mixing compressed and dry signals to set the right amount of transparency.

The three-function meter in KH-COMP1 gives you GR (gain reduction), IN (input), and OUT (output) settings, each useful for their own part in the mixing process. The GUI settings include overall plugin window size, knob behavior (circular, linear, relative, or host DAW default), and knob sensitivity. Holding shift while dragging any of the controls enables a fine-tuning mode, which I found extremely helpful when setting the makeup gain and filter controls.

All the features you expect from a compressor are in KH-COMP1, plus a bunch of extras that greatly increase its overall usability. The Mono / Stereo link knob adds to the versatility of KH-COMP1, making it good for both buss glue and mastering applications as well as for use on individual tracks. The Listen control takes all the guesswork out of setting the right frequencies to compress, increasing workflow speed and accuracy, and actually hearing how a sidechain signal “sounds” to a compressor was a trip.

According to the KH-COMP1 manual, Black Rooster employed the SSE2 instruction set found in modern computer processors to reduce the load on your computer when in use. This leads to remarkably low CPU use – less than 1.5% per instance on my 8-year-old desktop – which means you can easily stack multiple instances of KH-COMP1 on a single channel or buss to independently compress different frequency ranges, each with their own individual ratio and detection settings. This allowed me to use one instance of KH-COMP1 to compress the input signal, and a second instance for sidechaining on each channel. Overall, I couldn’t find a situation that KH-COMP1 wasn’t well-suited for.

Here is an acoustic guitar track recorded in stereo with one instance of KH-COMP1 on each channel, followed by the exact same track with KH-COMP1 disabled:

Though the price on Black Rooster Audio’s KH-COMP1 may be a bit on the high end for those just getting started with home recording, it’s absolutely packed with features. Between the Listen feature, sidechaining, multiple detector modes, and the invertible filter, KH-COMP1 left me wanting for nothing. If I only had the money to buy one compressor, KH-COMP1 would be on the shortlist for sure.

I’ve had the pleasure of using several different hardware compressors and dozens of compressor plugins over the years, each with their own positives and negatives. It’s rare to find a plugin that checks off all of the boxes and brings something new to the table to boot. With multiple detection modes and sidechaining, invertible filter with listen control, plus every other feature I would desire in a compressor plugin, I think I may have a new favorite. In conclusion, I give Black Rooster Audio’s KH-COMP1 a full five stars and a sincere recommendation. 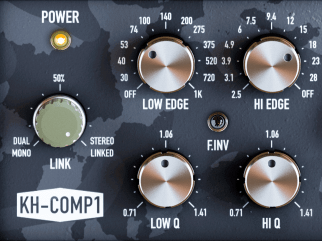 A transparent and musical compressor with multiple detection modes, sidechaining, invertible filter for multiband operation, and a listen control for dialing in the perfect frequency curve.

Dave Reed is an avid home studio enthusiast and the founder of HomeStudioToday. He has a bachelor's degree in production and nearly two decades of professional and home recording experience. Dave plays multiple instruments and has engineered and produced tracks in numerous genres.
Scroll to Top