Next up in the third installment of my piano virtual instrument review series is the most expensive offering of the bunch, Arturia Piano V2.  I have no doubts that Arturia’s piano plugin will be an impressive product, but the question remains whether it will retain its value at two to five times the retail price of the other options?  Let’s find out.

Arturia Piano V2 opens to a side view picture of a black grand piano above an impressive complement of expandable controls, which I’ll detail more in the next section.  Floating above the picture of the piano are four microphone icons representing the currently selected mic setup. The top bar contains one-click access to an enormous preset library, which expands to include filters and favorites to easily recall your favorite settings, as well as a nifty MIDI mapping feature.

All the standard controls are available at a glance, with tons more functionality hidden in the slide-out controls. Sitting at the bottom of the window are a full-sized piano roll, gain/output control, three pedal control buttons, polyphony, undo/redo and MIDI channel controls. There is also a CPU meter and a multi-core toggle button.  Overall, an extremely attractive setup with one-touch access to all of the most common controls.

From top to bottom, Arturia Piano V2 packs a ton of awesome features into its expansive interface.  I’ll start at the top and work my way down.

The preset library on Arturia Piano V2 is massive.  Nearly 90 presets in three main categories: Standard, Processed, and Experimental.  The Standard presets provide classic piano tones from concert grands to detuned upright bar pianos that can be used as starting points to dial in the perfect tone, while the Processed presets give easy access to a handful of ready-to-go grand piano tones with compression already applied.  The Experimental presets turn the ‘weird’ dial to eleven, with names like Tack Piano Player, Plucked Cymbalum, and Metal Fantasy. I found that clicking through the presets while playing pre-recorded MIDI was a fantastic introduction to the depth this plugin provides.

Clicking the MIDI button in the top right corner highlights all of the controls in Arturia Piano V2 that are available for MIDI assignment.  Once highlighted, clicking any of the buttons brings up a small submenu to enable instant MIDI learning. I was able to quickly and easily assign my keyboard’s volume control to any of the highlighted controls. The dropdown next to the MIDI button allows for saving and loading MIDI profiles, great for people with more than one MIDI device that they want to use to control the plugin.

Arturia Piano V2 comes with twelve piano models: American Grand, Japanese Grand, German Grand, Pop Grand, Classical Upright, Jazz upright, Pop Upright, Piano-Bar Upright, Plucked Grand, Tack Upright, Glass Grand, and Metal Grand.  The emphasis here is on ‘models’ – Arturia’s whole lineup of keyboard plugins in the V Collection, including Arturia Piano V2, are models, not samplers like the other piano plugins we’re looking at in our piano plugin round-up. American Grand lives up to its name and sounds like the Steinway concert grand I spent many hours noodling on in high school. The Japanese Grand has a far more bright and present tone, while the German Grand is softer and has more response in the lower-midrange and is probably my favorite of the three traditional models.  Pop Grand lives up to its name as a very bright and poppy option, sounding very much like a mini grand.

The uprights, true to form, have the more nasally sound of a traditional upright, each with a twist: Classical has a more pronounced low end, Jazz has a more balanced tone, Pop is again more bright and present, and Piano-Bar has that traditional twangy honky-tonk sound reminiscent of the piano from an old Western.  Plucked Grand is an experimental tone that imagines a piano with metallic mallets, while Tack Upright, per the included description, is an upright with metallic pins fixed to the hammers. Either is very reminiscent of a harpsichord. Rounding out the piano models, Glass Grand and Metal Grand each recreate the sound of a piano with glass or metal instead of wood and sound very ‘alien’ compared to the rest of the models

There are six tuning controls in Arturia Piano V2; three for the strings themselves, and three for the hammers.  Global Tension allows setting the “A” of the piano from 400 Hz all the way to 480Hz and defaults to 440Hz. Unison Detune alters the piano tuning in a range from very subtle to terribly obvious, but still has a very natural sound, reminiscent of the upright piano my grandmother kept in her front room.  Stretch tuning subtly increases or decreases relative tuning, and far ends of the keyboard only changed tuning by a cent or two at its highest setting. Dynamic Range can be set between 1dB and 80dB and offers a far more subtle lift or suppression than in other plugins I’ve reviewed. Hardness controls how hard the hammers strike the strings and affects the overall brightness and presence of the piano’s tone.  Finally, Position controls where the string is struck and responds to very tiny adjustments from center with a very twangy sound.

Six different settings await the user in the next section of Arturia Piano V2, including a very nifty Velocity Curve feature which fine-tunes the MIDI velocity of incoming notes using a graph similar to a parametric EQ.  The default settings are Fast, Faster, Linear, S-Curve (my favorite), Slow, Velocity 127 and Velocity 63. Users can save their own velocity settings via the selection menu.

Pedal Noise introduces a subtle “whoosh” sound at a varying decibel level when used with the sustain pedal, while Key Off Noise does the same for keypresses.  Hammer noise is less subtle and recreates the sound of a hammer “thud” on each note. Soundboard Resonance controls the sustain of notes, while Lid Position affects the overall tone of the piano and even includes a nifty animation in the plugin to open and close the piano’s lid.

The Mic Setup in Arturia Piano V2 is very in-depth.  There are five settings for each piano type: Studio AB, Classical AB, Player, Close Mic, and Under Lid for the grand pianos, and Studio, Hybrid, Jazz, AB, and DECCA for uprights.  Cycling through the options changes the visual representation of the mics hovering over the piano. In the slide-out controls is a miniature mixer for the four mics, including faders, pan, mute, channel linking, and slapback delay.  The granularity of this control is incredible, and can completely transform the tone of each of the twelve piano models. The slapback delay is used to create stereo imaging by placing the dry signal on one stereo channel and the delay signal on the opposite.  I fell in love with the mic settings and spent a great deal of time tweaking them to find the tone I used for the demo below.

Room Setup offers fourteen different reverb models, from small to large rooms to concert halls and hardware emulation.  A wet/dry control dials in the right amount of overall reverb, and Duration, Room Size and Decay Start in the slide-out allow fine-tuning of the reverb signal.  I enjoyed the subtlety of the reverb, as even at fully wet most of the presets weren’t overpowering. There is also a Stereo Delay included, with Dry/Wet, Delay Time, Feedback and Tone controls.  The Stereo Delay is also subtle, but adds a pleasant slapback

In a plugin packed with features, by far my favorite was the Master EQ.  Arturia Piano V2 has a 5-band parametric EQ with low-shelf, high-shelf, and three mid-points which can be controlled by a graphical interface or via Frequency, Gain and Q dials in the slide-out.  Using this EQ I was able to dial in changes both sweeping and subtle, completely changing the output tone of any of the piano models. Also included is a very musical compressor with standard Threshold, Ratio, Attack and Release controls, perfect for taming wild performances without altering the MIDI velocites.

Rounding out the features of Arturia Piano V2 are individual pedal controls, a polyphony menu, Multi-Core toggle, Undo/Redo with the last 5 changes accessible by a hamburger menu, Midi Channel and Panic controls, and a CPU meter all located in the bottom bar.  I found the Undo controls to be particularly useful for tweaking settings in the slide-out, as even small tweaks of some of the controls make very large changes in the overall tone.

Compared to other piano plugins I’ve used, Arturia Piano V2 has a ton of additional features.  So the question is – is it still easy to use? The answer is a resounding ‘yes.’ All of the controls for this plugin are on the main interface or in the slide-outs – nothing is hidden deep in a menu, which is an issue that tends to plague more feature-packed plugins.  I was impressed with how quickly and easily I could tweak the tone coming out. Also, with nearly 90 different presets ranging from classical to out-of-this-world, there are plenty of great starting points to choose from.

Here is a sample of Arturia Piano V2 using the German Init preset with just a few tweaks – tuning stretched about halfway, reverb set to Piano Concert Hall at about 50% wet, the high-sweep and high-mids pushed up just a bit, and the compressor kicked on at -10dB:

When I initially picked the plugins for my round-up, I wanted to dislike Arturia Piano V2 based on its price.  This plugin is the most expensive of the bunch, so I was expecting to evaluate its feature set and find it wanting in terms of value, but I found exactly the opposite.  Arturia Piano V2 sounds like a real piano, but is lightweight, nimble, and packed with features. The real value comes in when you purchase the entire V Collection, since for just a few hundred more you can get an additional 23 fully-featured classic instrument models like the Prophet V and Mellotron.

I am happy to give Arturia Piano V2 a full 5 stars in all categories. Arturia Piano V2 is packed with features and has an incredible range of usable tones, and in my opinion is well worth the cost of admission.  Visually appealing, well laid-out, versatile, and stuffed to the gills with highly musical controls, this easy-to-use plugin could quickly become my go-to for piano tones. 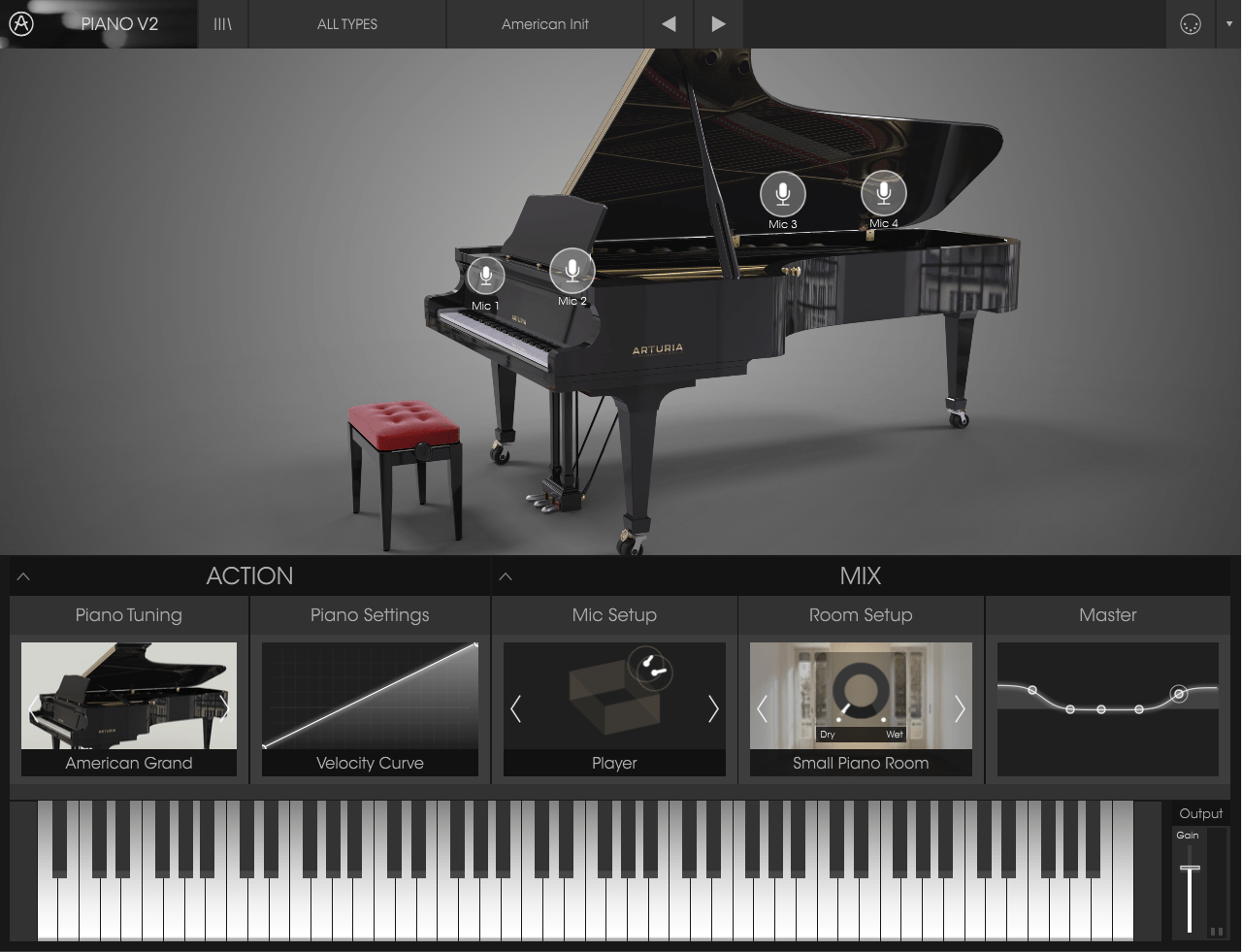 Visually appealing, well laid-out, versatile, and stuffed to the gills with highly musical controls, this easy-to-use plugin will quickly become your go-to for piano tones.