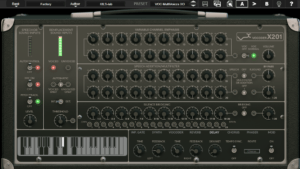 Description: Emulator of the Sennheiser VSM-201 Vocoder from the late 70s with added modern multi-effect processing.

XILS-lab has done an incredible job with the X-201 in recreating the look and feel of the classic Sennheiser VSM-201 vocoder.

The vocoder is possibly the greatest unsung hero of music over the last 50 years. With uses both subtle and intense, it’s an iconic component of instantly recognizable songs like Phil Collins’ “In The Air Tonight,” The Beastie Boys’ “Intergalactic,” Dre and 2Pac’s “California Love,” and, of course, several Daft Punk tunes including “One More Time.”

Moog, Roland, and numerous other companies made notable hardware vocoders over the years, but one that stands out among the crowd is the Sennheiser VSM-201. XILS-lab has continued their tradition of creating faithful emulations of classic hardware with the X-201, their tribute to the Sennheiser original. Let’s take a look.

If you’re familiar with the appearance of the original VSM-201, XILS-lab’s X-201 is about as close as you can get while still maintaining all the modern DAW functionality you’d expect. With the same matte black look and similarly-placed LEDs, knobs and switches, the X-201 is nearly its doppleganger.

Starting on the top, there’s a menu bar with preset loader, A/B, settings menu and help, below which sit the 7 control blocks that make up the bulk of the plugin window. The control blocks include singnal and vocoder input controls, channel emphasis and speech addition multifilters, silence bridging, a piano roll, and multi-effect module with gate, synth, vocoder, reverb, delay, chorus, phaser, and mod controls. What you see is what you get, and you get a whole lot of knobs to play with to be sure.

With one glance, you’ll see that there are a ton of knobs and switches on the X-201. Let’s take a more in-depth look at the controls:

The signals that are sent to X-201 are modified with the Speech Or Sound Inputs control. Autocontrol acts as an input gain rider, Mic On/Off disables the input passing to the Replacement input, and the Pitch Track switch turns off the modulator pitch control. The Replacement Sound Input controls the synthetic voice inputs and has a automatic, voiced (vowel) and unvoiced (consonant) modes, as well as an internal/external switch for enabling sidechain mode. Threshold controls the amount of detection. Both control sections have a meter to show the input levels and lots of LEDs to show control states at a glance.

There are a ton of knobs in these three sections of X-201, which can be intimidating at first, but by following the numbers down the chain it’s far simpler than it looks. Each of the three sections has enumerated knobs that represent frequencies in the audible spectrum from low to high. The Variable Channel Emphasis lets you choose which frequency bands are added to the vocoder signal from the input, the Speech Addition/Multi-filter dials in the speech emulation levels on each band, and the Silence Bridging allows you to add synth sounds between speech to “bridge” between spaces in the input signal.

In addition to functioning as a synth/vocoder, X-201 also has an input Gate, Reverb, Delay, Chorus, and Phaser, as well as a Modulator to control all of the above with LFOs, mod wheel or after touch. All of this extra functionality adds up to a ton of sonic possibilities when paired with the vocoder features.

I did run into a few issues with X-201 in terms of usability. For one, the band frequencies are not labeled anywhere, which makes the process of tweaking the vocoder a bit tedious at times. I understand that the goal of the overall interface design was realism to the original unit, but simply replacing “Band20” with “16kHz” in the tooltips would be a big help in the modern DAW setting, or at the very least listing the band frequencies in the manual, as they were in the original VSM-201 manual.

Also, the knobs require left-to-right mouse movement, not up-and-down like most plugins and DAWs, with no option to switch behavior. Finally, the switches don’t toggle when clicked and have to be click-dragged, which led to me now knowing that some of the switches had three settings since I’m not terribly familiar with the original.

My overall experience was that the X-201 was challenging to learn, even with the manual’s guidance. (The manual didn’t open for me from the help menu in the plugin, but I assume that bug will be patched in short order.) In addition to a lot of grammatical issues, the manual glosses over a lot of the functions and does a poor job of explaining some key features.

I think if the manual was revised and rewritten with the end-user in mind – especially an end-user that isn’t intimately familiar with the original hardware – or if a step-by-step tutorial video was available, this plugin’s usability could easily be 5 stars. I expect there to be a learning curve with any plugin, but I also expect that there be resources to counteract. As it stands now, I am taking away two stars for overall usability, with hopes that the score can be adjusted in a future update.

To cook up a couple of samples, I grabbed a female vocal from the #StayInspired Vocal sample pack on Loopcloud, then played with the settings in X-201 until I came up with something nifty. The first sample is with the Vocal Normal turned on in the Channel Emphasis settings, which enabled the vocoder synth on all frequencies, while the second sample is with the band-level control turned on and just the middle frequencies passed to the vocoder:

Though there are dozens of other vocoder plugins on the market, the XILS-lab X-201 is the only one I’ve found that recreates the original Sennheiser unit very nearly knob-for-knob. Based on that, if you’re looking for the singular sound created by that particular piece of gear and don’t have the 20 grand laying around to pick one up on the used market, the X-201 is obviously your best option.

Way back before Autotune, there was the vocoder, and few other units have the same iconic history as the VSM-201 from Sennheiser. XILS-lab has done an incredible job with the X-201 in recreating one of the vintage greats. Once I flipped enough switches, twisted enough knobs, and read through the whole manual twice (after getting a bit frustrated), I was able to get X-201 up and running and eventually had a great time with it. In my testing so far, I found a lot of fun and interesting possibilities just on one vocal track, and now that I understand it more fully, I look very forward to trying it out on other instruments as well.

Though it does leave a little something to be desired in the usability department, I have confidence that with a revision of the manual, a solid tutorial, and a few small coding tweaks, this could easily be a 5-star product. In conclusion, I give XILS-lab X-201 4.5 stars, and my recommendation for those looking to add a solid vintage vocoder sound to their arsenal. 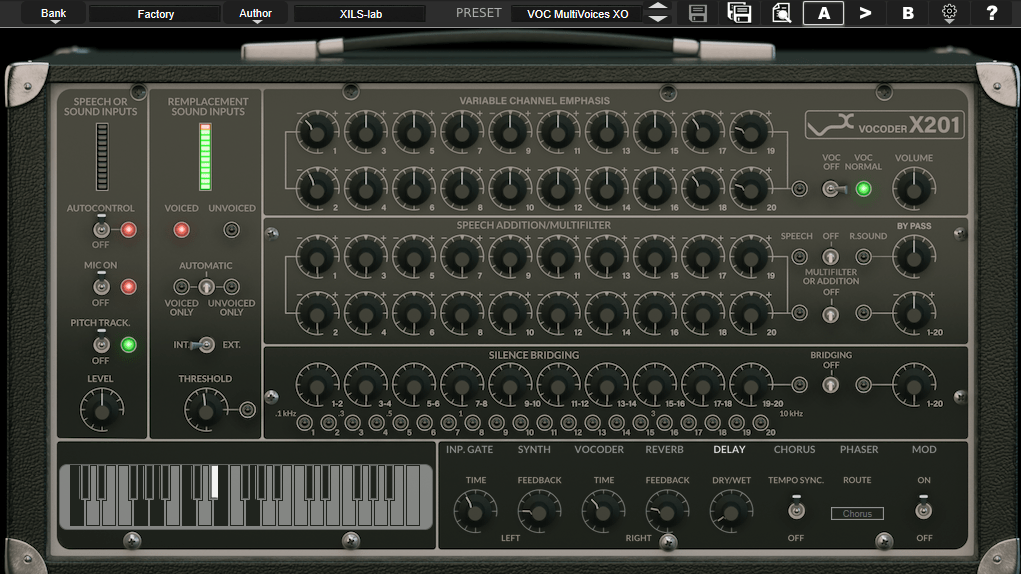 A knob-for-knob recreation of the vintage VSM-201 Vocoder with modern multi-effect features.