No matter how you slice it, there’s something just not quite right about the sound of a guitar plugged straight into an interface. It’s good, even great sometimes, but it’s not perfect. Adding a quality DI box or preamp makes a big difference in the overall sound, but for musicians on a budget that might not be an option. Also, if you want to go back and fix up already-recorded tracks, all the hardware in the world won’t fix a baked-in sound. United Plugins’ new DIFIX is designed to fix this problem by boosting and sweetening the signal from Hi-Z inputs on most budget audio interfaces without the added hardware. I did a bunch of testing on DIFIX to help you decide if it’s a good investment for your studio, so let’s check it out!

DIFIX has the look of a metal DI box with a mustard yellow powder coat finish. There’s a power switch at the top, plus a switch for Bass DI or Guitar DI. Below that are input and output gains like a real DI box, plus an Intensity knob. Simple controls in a neat-looking package.

With a total of three knobs and two switches including the bypass, there’s not a ton of features to talk about. The main switch at the top toggles between guitar and bass DI models, and the Intensity dials in the right amount of DI sparkle. The input and output offer a cut and boost of the signal and can be used to add saturation. Finally, the Power On/Off bypass control has a smart feature for making automations that use the switch free of clicks or pops. With exactly the features you’d expect from a quality DI box, switchable bass or guitar operation, plus the smart bypass and Intensity controls, DIFIX ticks off all the boxes from an emulation standpoint and gets an easy five stars there.

As a guitarist who has beein using amp sims and DIs for a very long time, I was intrigued by the idea of DIFIX and was curious how it would sound. Brass tacks, DIFIX is definitely a one-trick pony, but all things considered it’s a very good trick. The ability to add the sparkle and clarity of a good DI or preamp to your new tracks straight into the box is pretty sweet, and the fact that you can add it to existing tracks that were recorded in the past and revitalize the guitar and bass parts kicks it up a notch. In my extensive testing, which you’ll hear in the next section, I found that it did exactly what it’s designed to do, and even added a nice flavor when I added a mid-priced channel strip in the signal path. DIFIX is easy to use, and the dials take you from subtle to “wow” in a hurry, with plenty of usable room in between.

Because the whole idea of DIFIX is to make default inputs on budget interfaces sound better, we had to do some experimenting. First up, here’s a completely dry sample of a guitar (my Hondo hot mod, of course) with no effects, just jacked straight into a Behringer interface:

Next, here’s the same sample with DIFIX turned on and the Intensity cranked to 100%:

Now, let’s kick on AmpliTube and hear how the dry sample sounds without DIFIX through a rollicking amp setting:

Next, here’s the same amp sim with DIFIX ahead of it on the effects chain:

This next one was just for my own curiosity… what if we didn’t use the input on a budget interface, but instead ran it through a decent channel strip preamp first? Would DIFIX still make it sound better? First up is the dry sample, with the signal path of guitar to preamp to interface to AmpliTube with the same settings as above:

Now here’s the exact same signal path but with DIFIX inserted before AmpliTube:

Next up are the bass samples. First a dry track into my favorite bass amp sim preset in BIAS FX 2:

Then, the exact same track with DIFIX in the effects chain right before BIAS. I boosted the input volume slightly, and set the Intensity to about two thirds on the dial:

For the money, DIFIX does its one job very well. For beginners or for those on a budget, it takes the place of yet another hardware unit in the chain, and the ability to spice up older recordings is a big plus. Even if you do have higher-end hardware, it does add a bit of glitter to the sound, but not as dramatic of a difference as it is without. If someone takes on mixing clients, I could see this becoming an important tool in their workflow, as you can take tracks from clients with budget studios and really add some nice lustre in a hurry. At this price point it’s a solid value, and on sale it’s a must-have if you fit any of the use cases above.

Overall, United Plugins’ DIFIX is a great product that fulfills a unique need. DIFIX was tailor made for budget producers in home studio environments where signal path options are limited, though even higher-end hardware can benefit from the sound enhancement DIFIX offers. If you’re recording guitars in the box or if you’re a mixing engineer who works with clients on a budget, this is a must-have. I give DIFIX an enthusiastic five stars and my recommendation for DI warriors everywhere.

FIX YOUR INPUTS WITH DI EMULATION 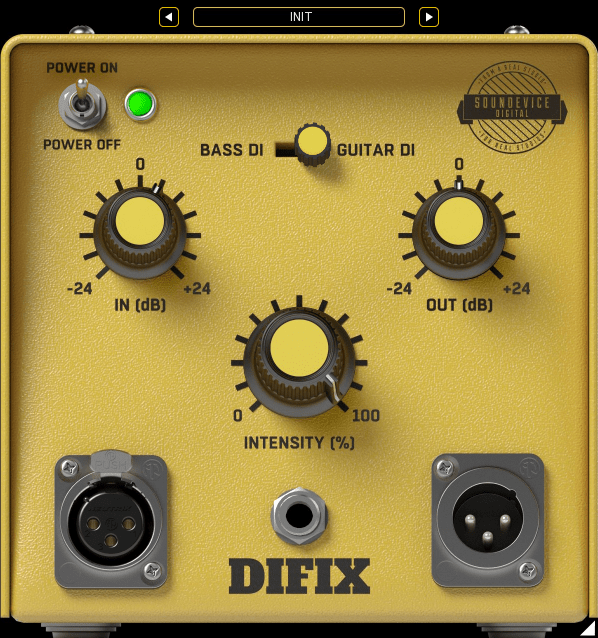 Designed for home studio musicians on a budget, DIFIX takes the often underwhelming sound of a guitar plugged straight into an interface and adds some sparkle and life.