Just shy of a year ago Black Rooster Audio released their first in a new signature series of plugins in collaboration with mixing engineer Koen Heldens (XXXTentacion, Dr. Dre, Missy Elliot), the aptly titled KH-COMP1 compressor. This week they released the second in the Koen Heldens signature series, KH-EQ1, which Black Rooster claims is “a semi-parametric 5-band EQ like no other.” Known more for their vintage reproductions like the recently released RO-140, this plugin is yet another departure from their usual releases in that it’s a completely new and unique concept. I checked out KH-EQ1 and made a video so you can see it in action. Check the video out here, then scroll down to read even more detail about this unique plugin:

Similar to its counterpart, KH-EQ1 has the signature bluish-grey camouflage finish and nickel knobs we saw before, this time with the look of a 2U rackmount EQ. Once again it has the yellow VU meter and jewel lights an`d white silkscreened lettering with Koen Heldens and Black Rooster logos. The dials are arranged into 7 columns and three rows, with a gain, frequency, and saturation control for each of 5 channels. Self-explanatory controls and a fun, attractive look.

KH-EQ1 is a five-band semi-parametric EQ with overlapping bands in low, low-mid, mid, high-mid, and high frequency ranges ranging between 20Hz and 33kHz. Each band can be toggled on or off and has a gain cut or boost of 18dB. Also, each frequency band can be independently punched up with its own saturation.

The Input gain in KH-EQ1 is variable between -24 and +24dB, and tapping the power LED allows you to bypass the plugin. The Mode knob allows you to vary the operation between Mid, Side, or Stereo, or a blend of Mid/Stereo or Stereo/Side. This unique feature lets you run it as standard stereo, or in a Mid/Side pair by running two instances, or nearly any combination therein.

The Output gain has a similar +/-24dB range, and the Dry/Wet Blend can be used in tandem to dial in just the right amount of cut or boost. Auto Listen turns on anytime you adjust the frequency on any band, dampening the frequencies outside the Q of the current band for effortlessly setting the band’s center frequency. The VU meter can be switched between Input and Output monitoring for correct gain settings on any source.

I pretty much fell in love with KH-EQ1 the second I loaded it onto a track. I liked the switchable bands, the sweepable Mid/Side/Stereo function, and most of all the multi-band saturation. I have other EQs in my arsenal with more bands or Q controls, but the overall sound output and the easily configurable saturation are what really hooked me in. The Auto Listen function, which is also available in Black Rooster’s KH-COMP1, makes dialing in certain instruments or ranges quick and easy. Besides the saturation it’s easily my favorite feature in the plugin, and I don’t know if I can do without it now that I’ve used it.

If there was one thing I could change about KH-EQ1, it would be to add true Mid/Side operation to a single instance of the plugin. Not that I have an issue with loading up two copies of this very lightweight and nimble EQ to pull off a full Mid/Side field, but I think it would be very cool if you could click a button and fold out a second instance in a docked window, or click an A/B button for Mid and Side. The two instance method works just fine, but perhaps this would be a good feature idea for KH-EQ version 2?

To showcase KH-EQ1, I created the sample below by replacing the mastering EQ on my test bed track with KH-EQ1. You can really hear how the snare and hats get a bit crisper and snappier, while the kick and bass get a bit more thump and roundness:

Here’s a dry export without KH-EQ1 for comparison:

In terms of overall value, KH-EQ1 is a solid choice. I think you would be hard-pressed to find a parametric EQ plugin that sounds this good and has this many features for anywhere near this price. I could easily see using KH-EQ1 everywhere you need an EQ, from individual tracks to busses to the master, all for a steal of a price.

What more could I say about KH-EQ1? It sounds great, it’s incredibly usable, it’s a bang-up value, and the saturation and mid-side options make this plugin a direct competitor with plugins that retail for five times the price. I give KH-EQ1 an easy 5 stars and a “must buy” recommendation for anyone who is using EQ in the box. It absolutely does not disappoint. 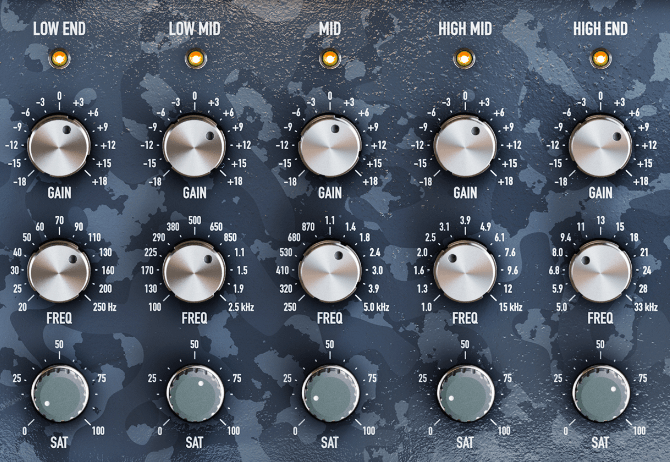 A unique and musical semi-parametric EQ with built-in multiband saturation that makes a great addition to your mixing and mastering arsenal.