Waves Grand Rhapsody Piano opens to an angled top view of a grand piano with the lid removed.  The default preset pictures two U87s close-miked above the soundboard. Along the top is a menu bar which includes sample and preset loaders and tuning controls, and a visualization of the damper and sustain pedals.  Below the piano visualization are the main controls, which include formant, velocity, three-level mic mixer, sustain resonance, key and pedal noise, compressor, EQ, reverb, gain, limiter, and output VU meter. Overall, the plugin is nice-looking and well laid-out.

Waves Grand Rhapsody Piano comes to the table with a complete complement of controls to customize your piano sound.  We’ll go through each section in detail.

Waves Grand Rhapsody Piano comes with a whopping 14GB+ of samples, which includes one complete sample set for each of the eight mic configurations.  The Sample menu allows you to choose the definition level of the samples you’re working with, either Standard (SD) or High (HD). The plugin includes 27 presets and a Full Reset which returns all the controls back to zero.  Shuffling through the plugins, there are lots of usable tones, and further down the list are several presets with heavier effects.

The Formant control acts as a master tone knob for Waves Grand Rhapsody Piano.  Increasing makes the piano extremely bright and decreasing it makes it more warm and mellow.  I preferred the Formant at dead zero, but could see applications where it would be useful. The Velocity Curve function increases or decreases the velocity of incoming notes exponentially or logarithmically, with the top center (+0) being fully linear.  I found the velocity most appealing at about +17. Either by bug or by design, when setting the knob to any negative value, full-velocity notes still ring in at a much higher velocity than the rest. This makes a negative Velocity Curve effectively unusable if your performance has any full-velocity notes since the rest of the notes are so heavily muted.  It really sticks out like a sore thumb, and as such, I have to reduce my features rating by one star.

Waves Grand Rhapsody Piano employs a three-channel mixer with eight different mic sample sets to fully capture the sound of one piano from different angles.  The mic models and positions are: a pair of Neumann U87s, Shure SM57s, or DPA 4007s close-miked above the hammers, Royer R121s or sE RN17s at the middle of the soundboard, and Coles 4038s or Neumann KM48s for room mics.  These mics can be used in any combination, and after a great deal of experimentation, I found that my favorite combo was the U87s, the Royers and the Coles. (What can I say, I’m an expensive date.)

The three-channel mixer has Level, Delay, Solo, Mute and Invert controls.  The Delay is where the magic really happens with the samples. By adding a touch of delay to the middle and room mics – about 4ms and 9ms respectively – you can effectively recreate the sound traveling from where the strings are struck with the hammer across the soundboard towards the back of the piano.  It creates a natural room reverb sound without applying any effects, and I totally dig it. One thing I did miss compared to other plugins is the ability to add stereo separation.

The Key and Pedal Noise controls in Grand Rhapsody Piano are self-explanatory and range from a nice detail to absolute overkill; I preferred both at about 10-15%.  The Compressor is a single knob that gradually increases the output volume between 0 and around 50%, then further smushes the signal between 50% and 100%.  I found it most useful at the halfway mark. The three-band EQ consists of a low-shelf, high-shelf and bell filter for the mids, with a frequency selector for the lows and mids.  The EQ is very powerful and can fully transform the sound with a slight twist. My ears, however, preferred a very slight boost at 110Hz and on the high-shelf, leaving the mid EQ untouched.

The Sustain Resonance control in Waves Grand Rhapsody Piano ranges from 0 to 100, however it may be more appropriate to say it ‘goes to eleven’ à la Nigel Tufnel in Spinal Tap.  When set above about 65-70% a very strange and I assume unintended effect happens. It’s hard to describe, but to put it into words it sounds like pressing the sustain pedal dunks your head underwater, only to come up for air when the pedal is released.  This increases to the point of absurdity as the control reaches 100%. I found this control best set around 50%.

Ten Reverb models are included with Grand Rhapsody Piano: Medium Stage, Empty Hall, Echo Verb BPM, Multi Effect BPM, Recording Studio, Cathedral, Flange Reverb, Diffused Chorus, Concert Hall, and Reverse Reverb.  I found it interesting that this section is called Reverb and not Effects, since nearly half of the models aren’t really reverbs. Also, considering that nearly everything else in the plugin serves to faithfully recreate the sound of a single grand piano using expensive mics I was curious as to why the flange and chorus were included.  Not that I don’t appreciate having additional options and features, it just feels a little out of place. The Reverb controls include Mix, ER/Tail, Pre Delay, Time, Damper, and Hi-Shelf.

To be totally transparent, after spending quite a bit of time fiddling with the Reverb controls, I didn’t really like any of them. Even at a low mix level most of the reverbs sounded far too boomy for my taste.  I preferred the sounds coming out of the plugin with the effects switched off completely and relying on the multi-mic delay settings to create a nice reverb.

The Volume control in Waves Grand Rhapsody Piano ranges from 0 to 10.  With the compressor kicked on at 50% I found the volume best left between 6.5 and 7 to avoid clipping.  The limiter is a great addition, and does a wonderful job of making sure that even the craziest settings don’t clip your meters while tweaking settings, though I would have preferred the ability to set a limit instead of a hard 0dB.  The VU meter, which is calibrated at -18dB to maintain headroom, includes two needles for the two stereo channels. I did feel it was an odd design choice to include a split VU meter but not include any controls that actually separate the stereo channels.

In terms of available tones, I found Waves Grand Rhapsody Piano to be a breathtaking reproduction of the single piano that was recorded to create the eight mic samples.  This did come with several caveats, however. First, the sheer largesse of the samples means a long download time for most users, and also a considerable load time for those who aren’t using solid-state drives for sample storage.  Switching from SD to HD or changing mics sometimes took as long as a full minute on my test system. Even after getting all of the samples loaded in, there was still an audible ‘click’ and a minimum of a 2-3 second pause when changing presets or mics, which made it very hard to A/B changes and dial in the perfect tone.

Secondly, the plugin ceased functioning correctly twice in the writing of this review such that I had to either restart the plugin, my DAW or both, which is unprecedented among the hundreds of plugins I’ve used over the years. Adding to this the several bugs (or poorly thought-out features) I mentioned above, I do have to deduct two stars from usability.

Here is a sample of Waves Grand Rhapsody Piano with a custom preset I created from the settings mentioned in the sections above:

When I started the long download for Waves Grand Rhapsody Piano, I fully expected to be blown away by this plugin.  After using it extensively, I found myself somewhat disappointed. Make no mistake, the samples are absolutely amazing; it sounds and feels like you are actually in the room with a grand piano when you’re playing. In terms of value, you won’t find a better-sounding piano tone in this price range, so I do feel that it deserves the full five stars there.

If the quality of piano samples is your only consideration, then this plugin is absolutely for you, full stop. What I didn’t expect to encounter in my testing were the bugs and/or design issues that seem to plague this plugin and take away from its overall functionality.  In conclusion, then, Waves Grand Rhapsody Piano has earned a 4.25 out of 5 stars in my review. I will be happy to revisit that score again when Waves releases an updated version that reworks some of the issues highlighted above. 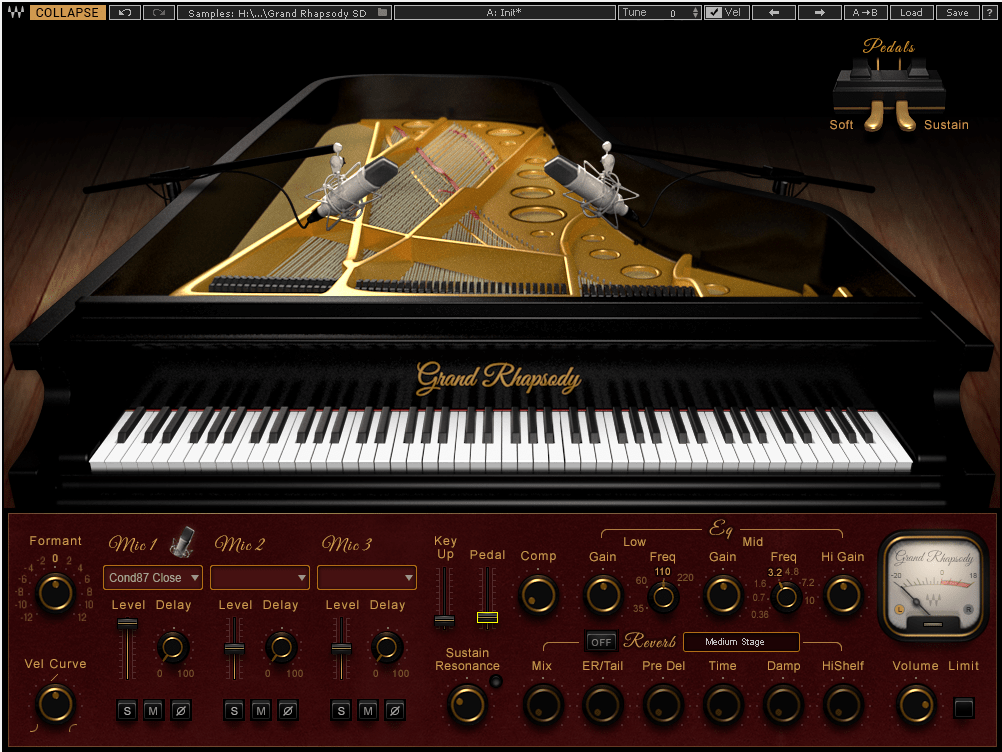